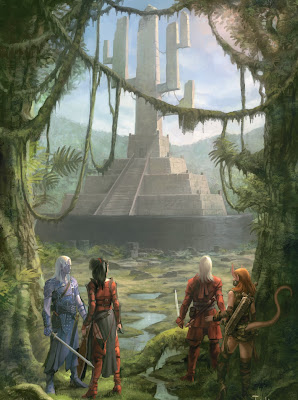 D&D 3.5e Campaign
Our campaign will take place in the Forgotten Realms setting of Faerun during the month of Mirtul, in 1374 DR the “Year of the Lightning Storms”. In recent years Faerun has experienced a return of the Archwizards, the Shadowvar, the City of Shade, an explosion of wild magic, and a plague of rogue dragons. In recent times strange lighting storms have created havoc in different areas of Faerun. Your characters begin their journey in the Western Heartlands in or near the town of Daggerford.

The latest information on Daggerford:
Nearly two years ago, unknown assassins poisoned the Duke of Daggerford, Pwyll “Greatshout” Daggerford, his sister, Lady Bronwyn, and his bastard brother, Lord Llewellyn Longhand, leaving the duchy without an heir. The perpetrators were never caught. Soon thereafter, the Town Council met and elected Lanod Ondabar of Irieabor as Governor-Mayor. Lanod is the brother of the well-respected Delfen “Yellowknife” Ondabar who resides in Daggerford as a retired adventurer. Delfen still offers his services as a local Sage, and is considered “The smartest man in town”. The Governor-Mayor quickly appointed his old adventuring companion, Cubbin, as Sheriff and began selling favors from the former duke’s castle to the highest bidder. In less than 24 months, the once-proud town of Daggerford has become synonymous with vice and exploitation, to the frustration of Sherlen Spearslayer (Captain of the Militia). Long-established businesses have been sold, their owners forced out by “new investors” allied with Lanod and Cubbin. In conscious imitation of the Lords of Waterdeep, the identities of the 23-member Town Council of Daggerford are nominally secret except to each other, but “everyone” knows the roster includes the town’s guild masters, and most prominent clerics. 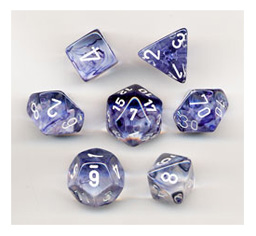 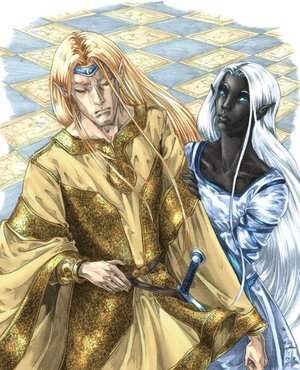 - How tough is your adventuring party? 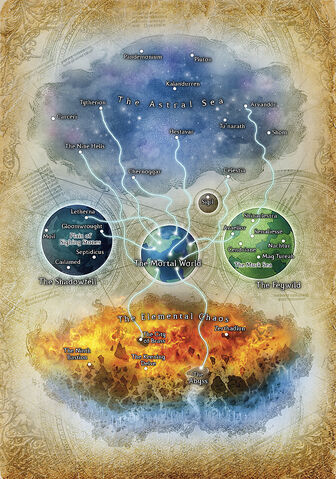 -Cosmology of the Forgotten Realms

Points of Interest in Daggerford

Points of Interest in the Region

You will be able to get restoration for free, but anyone else not part of lathander or one of the local temples will have to pay.

We are going to need several restoration spells to alleviate the Wis drain. Does HS have a buddy willing to throw some 4th lvl spells our way in town or will we need to pay?

Gamers! You need to come up with a fitting adventuring name for your group…As you increase in level and your fame increases (or infamy); you will gain attention and possible benefits when traveling abroad. I think I posted one under adventuring groups but just gave it a name to create it. Everyone post an idea and vote on it. Keep in mind your exploits, etc.

I think both ideas are good, and I would agree to get this going ASAP. Unless someone has a better idea or a way to improve upon Scotts ideas lets do this. I will start creating My items list as a DM only and then I can compare with what Rodney has, or if he hands the reigns over to someone else….Let me know guys. The game is already slow enough on Skype with the audio issues, muting mics, and distractions. Let’s do what we can to make the experience more enjoyable.

An idea for the treasure log —
I just tested the create an item and I can create a new item owned by me. I suggest that Rodney, as our treasure keeper, creates a new item and calls it Party Treasure Log Player Version and Shawn changes his to Party Treasure Log DM Version. It should be easy to reconcile the two and that should also help Shawn a little in keeping track of what the party actually has and knows since he can show what the item really is on his log – i.e. “brown potion of giant strength” – while the player version simply states “brown potion” until we find a way to identify it. Of course if it is a cursed item or something like that and we don’t figure it out, he may still want to keep that under wraps as a fun surprise.
—just a suggestion (mostly because I am still confused over where the final list resides and how it overlaps with the treasure listed on the portal)

HS’s vote for right now — we need to split into two groups for healing whether or not those groups split up. The druid should be in the “faster” group and HS in “slower” (match speed to members if possible) and both should be tagging CLW via wand on group members until they are close to max. I would recommend the heal kit, but you can’t do that on the go. One group can search the area while the other tracks the runner or both can high tail it out, but whatever is done should be accomplished in such a way that the druid and cleric can keep pace and tap a cure 1/round on someone close until the group is close to max. Remember that the cleric will need to take care of the undead again in a little over a minute as well.

Scott, I liked how you incorporated your FR character sheet into your Bio…Well done.

Grog gets 100xp Bonus for the adventure log entries. Keep them coming.

Everyone reply with the current magic items you have on your PC…I’m going to create item cards within OP for your viewing pleasure.

I cant you have to be a member of Obsidian to have edit power to all tabs I think…You guys can send it to me and I can place it, or we can do it under the adventure log.

You need to put all of us as authors of the party treasure log or else we cant update it.

I'm sorry, but we no longer support this web browser. Please upgrade your browser or install Chrome or Firefox to enjoy the full functionality of this site.